The era has come, where the digital technology will blur the distinction between real world and virtual world. Virtual reality and Augmented reality is opening new frontiers, it will change the way we will interact with the real world. It is opening a new path and we are at the the threshold of a new revolution, a giant leap in the progress of mankind.

Should we consider a smartphone a computer ? Yes.

Already computer desktop has shrink ed in size and it has submerged into the fist of common men. The new generation of smart phone(s) have the same computing strength because of processing power, memory, storage capacity and internet capacity which a decade before, we could get in a decently priced desktop or laptop computer. And to accelerate the transition , cloud storage and 3G/4G technology are adding more fuels.

What is Virtual Reality ? What is Augmented Reality ?

So What is reality ? Once a Buddhist monk asked the Buddha , what is this world ? What am I seeing is a dream ? Are we living in a dream ? Or Do we have dreams when we sleep at night ? The Buddha replied neither of this. We are just having awareness perceiving the reality of universe. Virtual Reality is creation of totally new reality parallel to our world using digital technology and graphics. Augmented Reality supplements our new world with extra information in the form of graphics, images and text. It creates a new reality with union of real world and digital information.
These two technologies are raising new questions in front of mankind. Can we create miniature world(s) parallel to this world using digital technology? Can we see,feel and experience the thing(s),object(s),material(s),sound(s) and visual(s) which does not exist in our real world or it exist(s) in a different way ? Or May it exist elsewhere in the Universe?

Technology has given power to mankind to create new realities. New kind of game(s) are being created where player(s) interact with actual world with imaginary game character(s) or avatar(s) merged into our own real world. Pokemon Go is best example of this game which has given the common people the taste of this new technology.It has become one of the most popular game based on Augmented Reality technology.

How will people behave or react when the time will come when physical presence of human at any event will become less important ? Will the future generation of chatting or messenger application(s) will be designed in such a way that they will be able to project avatar(s) of chatter(s) as 3D holographic image(s) ?
Two people will be able to chat using their avatar(s) face to face without being physically present. Using hardware technology like Google Glass Or Microsoft HoloLens  Or Occulus vision , it is a distant reality in near future very easily achievable. Board-room corporate meetings can be conducted by seating at home by the participants. Teachers and students can interact in virtual classroom using their holographic 3D avatar(s) without need of being present in schools or colleges.

Our day to day life will be enhanced drastically using the above technologies. Newspaper in 3D digital holographic form will be delivered to you in front of your eyes using internet and Augmented Reality in your glasses. Physical copy of newspaper will loose its importance thereby saving lot of paper and incidentally need of cutting trees.
Yes, It will be possible to learn driving in your busiest neighborhood without actually hitting road and damaging your car.It is possible to create simulation and reality based applications which will allow to do that straightway in your hand and in front of your eyes.
The life of movie buffs will change dramatically. It will be possible to watch movies with your favorite actor or actress as watcher being part of the scene. A new kind of hardware Microsoft HoloLens will make it possible to watch movie as being part of movie and actually interacting with your actor/actress in real-time.
The biggest use of augmented reality can be for those who continuously need to refer manuals, diagrams or books in order to carry their professional job. Surgeons, engineers, technicians and other people who need to supplement the live situational information or condition with additional information like working manuals, books, reference materials or internet itself.

Surgeons can perform surgery with ideal anatomical information super-imposed or augmented on patient. More research on the role of Augmented Reality and Medicine can be found here.
Engineers/technicians can perform repairing work with all past information/history , engineering diagrams and drawings super-imposed in front of their eyes. They can actually interact with the information in real-time to carry their job in ideal way. 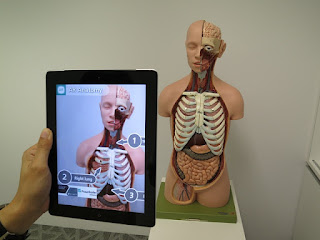 Currently,e-commerce industry specially fashion and retail is more focused on price and display of product(s) in basic form with images without giving much scope for interaction with the product for end-users. Specially e-commerce in apparel industry is facing a problem where end-user can not have trial or touch and feel of the product before buying.

Well, this technology at least can help in reducing that problem in slightly different way. End-users can look at 3D holograms of the apparel on-line and their avatar(s) can actually try it also to get the real feel of fitting and look. A new kind of holographic e-commerce platform can be developed.

Virtual reality and augmented reality are two kinds of technology which will blend in our day-to-day life like internet has blended.
The current prohibition is mainly related to hardware used for this kind of technology which are not available at cost-effective price.Since availability of hardware is costly, application development market has not matured in this segment yet.

Be in touch with us !

All brand names, logos, copyrights and trademarks are acknowledged and they belong to their respective owners.

We declare that some of the links on this website are affiliate links. If you will make a purchase from the affiliate links, we earn a commission at no additional cost for you.

You can find out more about which cookies we are using or switch them off in settings.

This website uses cookies so that we can provide you with the best user experience possible. Cookie information is stored in your browser and performs functions such as recognising you when you return to our website and helping our team to understand which sections of the website you find most interesting and useful.

Strictly Necessary Cookie should be enabled at all times so that we can save your preferences for cookie settings.

If you disable this cookie, we will not be able to save your preferences. This means that every time you visit this website you will need to enable or disable cookies again.